"If more of us valued food and cheer and song above hoarded gold, it would be a merrier world." – J.R.R. Tolkien

If I’m remembering correctly, this is the third time I’ve been to Aspro Ble, but definitely the first time that I’ve been with such a large group of people (10+). When dining with a large group, it’s almost always more sensible to order the banquet menu to reduce the time taken to order, as well as (hopefully) the time for the food to come out. You’re forewarned though, the photos are quite terrible because someone forgot to bring their camera…moving on though!

As with any self-respecting Greek restaurant, the entrée of bread and dips (salmon, hommus and tsatziki) was fresh and tasty. 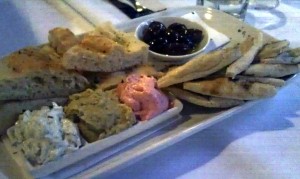 What was a little surprising was that some of my dining companions had never had tsatziki before! They seemed to enjoy it, so I guess I get extra brownie points for introducing them to something new.

The bread and dips were followed by a few more vegetarian (but definitely not vegan) entrees: 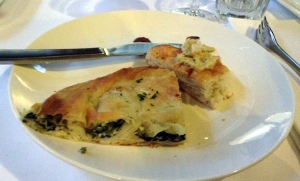 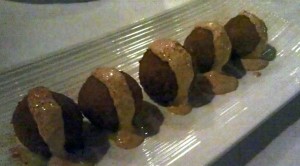 I realised that I have a strange attachment to both spinach and cheese (as you may have noticed from previous posts) and so loved the pastries. These tasted quite similar to the boreks you can buy at the Queen Victoria Markets, but in all honesty, you wouldn’t want anything too different.

As for the deep-fried cheese balls, they were as healthy as they sound. They were perhaps a little too oily for my taste, but I didn’t expect otherwise. From here on in, it was time for the meat-procession, starting with spicy prawns.

Luckily for me, some of the others didn’t eat seafood so I had a few more of these tasty morsels than I was rightfully entitled too. This was probably a good thing, because it was much too long of a wait before the next few dishes came out. When they did come out though, there was a lot of meat on the table, just waiting for us to ravenously devour them. 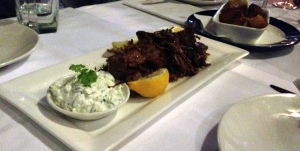 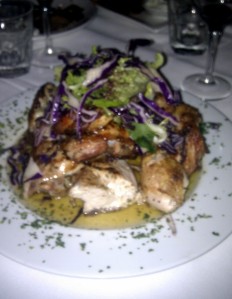 Or rather, everyone else was quite civilized and I probably ate too much. A typical Greek salad was served too, but for some reason I don’t have a picture. Also, don’t ask me what the dishes were called exactly as I didn’t get to see the menu. The waiter was indeed very helpful in describing each dish to us, so it’s my fault for not taking down notes/remembering. The lamb and chicken were quite good, but I particularly loved the potatoes which were slightly crisp on the outside, but oh-so soft on the inside. Perfection.

The food feast wasn’t over yet, because no banquet is complete without dessert. Or desserts rather.

(What a terrible image!)

The baklava was fairly standard, with lots of nuts and honey but I really loved the Greek donuts. So much so that I had two (don’t worry, I worked extra hard at the gym to make up for it). They’re much tastier than your usual donuts, and the slight sourness of the yogurt offsets them perfectly.

All in all, the banquet was delicious and the bill wasn’t ridiculously expensive. The service was attentive and friendly, I just wish they’d been a little a quicker in serving the mains. I’ll have to make a point of dining here again and taking better pictures, though I’m not sure the banquet is available for small groups. Anyone up for a large-group dinner catch-up sometime soon?

One response to “Aspro Ble”